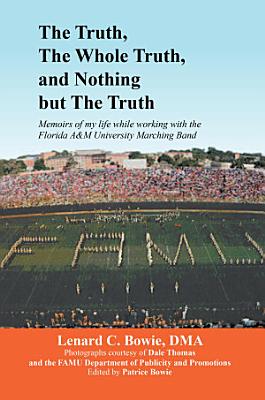 GET BOOK
THE TRUTH, THE WHOLE TRUTH, AND NOTHING BUT THE TRUTH Book Description:

After terminating my tenure and positions as Trumpet Teacher, Associate Director of Bands and Chairman of Instrumental Music at Florida A&M University in 1980, I was bombarded with questions and often criticized on the wisdom of abandoning the pathway I had earned as heir apparent to the position of Director of Bands. Rumors were also whispered that I was fired for involvement in questionable and unprofessional faculty-student relationships. I deliberately hesitated to answer such questions, first, because they could possibly be interpreted as my being critical of the people and the program that made it possible for me to develop whatever God given talents I possessed. Second, I chose to quietly accept said criticisms and dismiss the rumors to avoid giving them credibility by commenting on them one way or the other. However, I have always felt an obligation to provide the truth to the friends, colleagues, and fans that assisted in the realization of my professional pursuits at FAMU. These questions and inquiries gradually subsided after my appointment as Chairman of Fine Arts at the University of North Florida four years later. Thirty one years later, the disturbing news from Orlando, Florida, announcing the death of Robert Champion, a FAMU Drum Major, renewed the urgency for me to address long standing and new questions on various aspects about FAMU’s band. The untimely death of Champion resulted, allegedly, from a brutal “ritual of acceptance” hazing, on the occasion of the 2011 Orange Blossom Classic football game between the Florida A&M and Bethune Cookman Universities. Regrettably many supporters, fans and former band members, including myself, had long feared such an occurrence would happen sooner or later. I was similarly harassed as a freshman during the 1958 band season following the Orange Blossom Classic held in Miami. In spite of my negative treatment, I went on to become Band President and, after graduating, Associate Director of this esteemed organization. Therefore, I feel intimately familiar with the band and its history, including the unsanctioned tradition of hazing, and feel competent to voice my opinions on the question of hazing and on the current and future status of the FAMU band program. Following the death of Mr. Champion, I again began receiving renewed calls, visits, and e-mails, inquiring of my thinking and position on the situation at hand. After Dr. Julian White, Director of Bands, was unceremoniously terminated, over 150 former students encouraged me to seek the position of Director. Obviously, those encouraging me to do so, did not factor in my advancing age or health status. Nonetheless, these renewed questions awakened the need and obligation for me to speak out and weigh- in on long standing issues about the band and my reasons for abandoning it. Accordingly, the crisis of Mr. Champion’s death has created a renewed sense of urgency for me to finally speak out and describe how such issues led to my departure from the FAMU Marching Band. It is hoped that this booklet will provide truthful answers to long standing questions and serve to explore a plethora of traditions and misconceptions about the band. This writing is a recollection of my personal journey as a student participant and eventual Associate Director of this Band. The reader is therefore afforded to share the author’s perspective, insight and self-discovery during this time frame. It is hoped that this booklet will positively assist in a similar “societal-discovery” and serve as a deterrent to hazing, violence and other punitive actions that have all but become standard codes of conduct on many college and university campuses. Lenard C. Bowie, DMA Former Associate Director of Bands Florida A&M University

THE TRUTH, THE WHOLE TRUTH, AND NOTHING BUT THE TRUTH

The Truth... the WHOLE Truth... and Nothing But the Truth!

Authors: Adam M. Speaks
Categories:
Imagine a world where babies are born and their names are instantly turned into corporations. Where birth certificates are worth millions. Where colonists took

The Whole Truth and Nothing But

Authors: Hedda Hopper
Categories: Biography & Autobiography
From the dawn of the studio system to the decade it all came crashing down, Hedda Hopper was one of the Queens of Hollywood. Although she made her name as a sta

I Swear to Tell the Truth, the Whole Truth and Nothing But the Truth So Help Me God

Authors: Najma F. London
Categories: Biography & Autobiography
Growing up going form one foster home to another like a game piece on a no-win board can shatter your view of yourself and the world. In my memoir, "I Swear to

Authors: Russell Hurlburt
Categories: Psychology
A psychologist and a philosopher with opposing viewpoints discuss the extent to which it is possible to report accurately on our own conscious experience, consi

The Truth- The Whole Truth and Nothing But the Truth.

Authors: Conroy Broomfield
Categories: Religion
"Thy righteousness is an everlasting righteousness, and thy law is the TRUTH ..." (Ps 119:142) FROM THE KINGS' PALACE TO THE POOR HOUSE, THE JUDGEMENT HALLS OR

The Truth, the Whole Truth and Nothing But the Truth

Authors: G. Oddie
Categories: Philosophy
The concept of likeness to truth, like that of truth itself, is fundamental to a realist conception of inquiry. To demonstrate this we need only make two rather