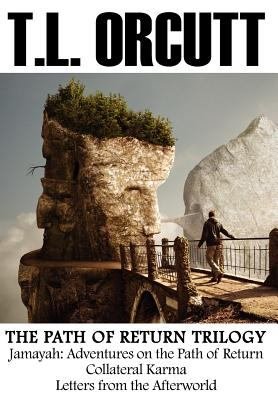 The Path of Return Trilogy is a remarkable literary contribution outside the commercial romance and detective formulas - a raw tale painted with heartfelt humor which captures the innocence of imagination and the mystical forces that navigate life. In the first novel, Jamayah: Adventures on the Path of Return, baby-boomer Bob Kramer arrives in mid-life crisis with a job loss and recent divorce. Jamayah, an unlikely cosmopolitan guru, mysteriously recruits Bob as an initiate on the Path of Return - a fusion of wisdom traditions tempered toward paranormal mastery and cosmic awareness. The progressively intense challenge is how Bob will reconcile his scientific skepticism in a mystical adventure that embraces a strip bar and the horrors of war. In the end, Bob returns to ordinary life, but feels detached, alone, and indifferent - a malaise Jamayah reframes as having passed a sacred rite of passage. The sequel, Collateral Karma, opens after Rickshaw Lubowski (formerly Bob Kramer) has ditched the Path of Return in search of more tangible things - like sex, occultism, and sorcery. As a result, he becomes the target of a curse cast by the evil leader of a ceremonial cult who practices ritual sex and black magick. Rickshaw's descent into the world of sensation and desire incurs mysterious nightmares all too real, starting with the obsessively expected death of his new fiance. Desperate, he meets a blind fortuneteller who knows more about his destiny than anyone should and with whom he falls in love. Only when he loses touch with reality does his mentor, Jamayah, appear. Together, they join forces with shamanic sorcerers to reverse the deadly curse. The last novel in the series, Letters from the Afterworld, begins with Rickshaw reminiscing about his marriage to Crystal a year before. Rickshaw attends a seance in Los Angeles conducted by a medium with a gift for automatic writing and receives a channeled letter for his friend Murdock. Evidently, Murdock is on a soul recall list for people whose souls prematurely inhabited their selected bodies. Other friends of Rickshaw have dreams of the same recall letters and incur near fatal illnesses and accidents. Jamayah distrusts the source of the afterworld letters and believes hybrid souls (who formerly incarnated on an alien planet), are exploiting humans for metabolic enzymes through enzymatic blood transfusions. Stakes are raised when Rattlesnake Dan and Murdock are kidnapped and a ten year old boy is murdered. Finally, Rickshaw, Jamayah, SBL, Weird Willie, Raoul, Juan, Apollo, and Billy the Kid mobilize the Cosmic Rangers with the pledge of liberty and justice for all."

Authors: T. L. Orcutt
Categories: Fiction
The Path of Return Trilogy is a remarkable literary contribution outside the commercial romance and detective formulas - a raw tale painted with heartfelt humor