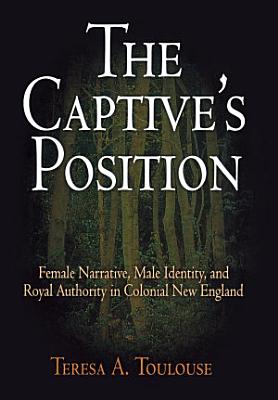 Why do narratives of Indian captivity emerge in New England between 1682 and 1707 and why are these texts, so centrally concerned with women's experience, supported and even written by a powerful group of Puritan ministers? In The Captive's Position, Teresa Toulouse argues for a new interpretation of the captivity narrative—one that takes into account the profound shifts in political and social authority and legitimacy that occurred in New England at the end of the seventeenth century. While North American narratives of Indian captivity had been written before this period by French priests and other European adventurers, those stories had focused largely on Catholic conversions and martyrdoms or male strategies for survival among the Indians. In contrast, the New England texts represented a colonial Protestant woman who was separated brutally from her family but who demonstrated qualities of religious acceptance, humility, and obedience until she was eventually returned to her own community. Toulouse explores how the female captive's position came to resonate so powerfully for traditional male elites in the second and third generation of the Massachusetts colony. Threatened by ongoing wars with Indians and French as well as by a range of royal English interventions in New England political and cultural life, figures such as Increase Mather, Cotton Mather, and John Williams perceived themselves to be equally challenged by religious and social conflicts within New England. By responding to and employing popular representations of female captivity, they were enabled to express their ambivalence toward the world of their fathers and toward imperial expansion and thereby to negotiate their own complicated sense of personal and cultural identity. Examining the captivity narratives of Mary Rowlandson, Hannah Dustan, Hannah Swarton, and John Williams (who comes to stand in for the female captive), Toulouse asserts the need to read these gendered texts as cultural products that variably engage, shape, and confound colonial attitudes toward both Europe and the local scene in Massachusetts. In doing so, The Captive's Position offers a new story of the rise and breakdown of orthodox Puritan captivities and a meditation on the relationship between dreams of authority and historical change.

Authors: Teresa A. Toulouse
Categories: Literary Criticism
Why do narratives of Indian captivity emerge in New England between 1682 and 1707 and why are these texts, so centrally concerned with women's experience, suppo

Authors: James F. Brooks
Categories: History
This sweeping, richly evocative study examines the origins and legacies of a flourishing captive exchange economy within and among native American and Eurameric

Authors: James F. Brooks
Categories: Family & Relationships
This sweeping, richly evocative study examines the origins and legacies of a flourishing captive exchange economy within and among native American and Eurameric

Documents on Prisoners of War

Authors: Katharine Mawford
Categories: Literary Criticism
Although the recent ‘memory boom’ has led to increasing interdisciplinary interest, there is a significant gap relating to the examination of this topic in

The People's Bible History Prepared in the Light of Recent Investigations by Some of the Foremost Thinkers in Europe & America...