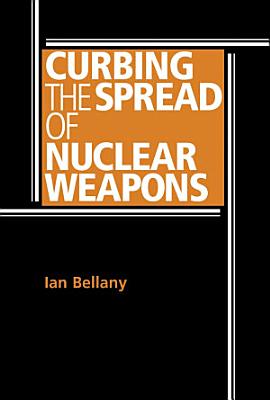 GET BOOK
Curbing the spread of nuclear weapons Book Description:

With the 2005 Review Conference of the nuclear non-proliferation treaty in the background, this book provides a fully detailed but accessible and accurate introduction to the technical aspects of nuclear energy and nuclear weapons for the specialist and non-specialist alike. It considers nuclear weapons from varying perspectives, including the technology perspective, which views them as spillovers from nuclear energy programmes; and the theoretical perspective, which looks at the collision between national and international security – the security dilemma – involved in nuclear proliferation. It aims to demonstrate that international security is unlikely to benefit from encouraging the spread of nuclear weapons except in situations where the security complex is already largely nuclearised. The political constraints on nuclear spread as solutions to the security dilemma are also examined in three linked categories, including an unusually full discussion of the phenomenon of nuclear-free zones, with particular emphasis on the zone covering Latin America. The remarkably consistent anti-proliferation policies of the USA from Baruch to Bush are debated and the nuclear non-proliferation treaty itself, with special attention paid to the international atomic energy’s safeguards system is frankly appraised.

Curbing the spread of nuclear weapons

Authors: Ian Bellany
Categories: Political Science
With the 2005 Review Conference of the nuclear non-proliferation treaty in the background, this book provides a fully detailed but accessible and accurate intro