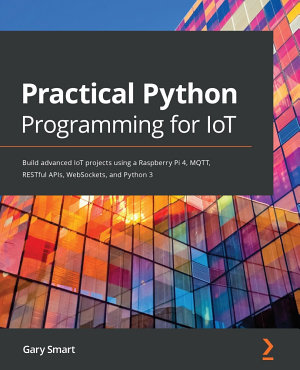 Leverage Python and Raspberry Pi to create complex IoT applications capable of creating and detecting movement and measuring distance, light, and a host of other environmental conditions Key FeaturesLearn the fundamentals of electronics and how to integrate them with a Raspberry PiUnderstand how to build RESTful APIs, WebSocket APIs, and MQTT-based applicationsExplore alternative approaches to structuring IoT applications with PythonBook Description The age of connected devices is here, be it fitness bands or smart homes. It's now more important than ever to understand how hardware components interact with the internet to collect and analyze user data. The Internet of Things (IoT), combined with the popular open source language Python, can be used to build powerful and intelligent IoT systems with intuitive interfaces. This book consists of three parts, with the first focusing on the "Internet" component of IoT. You'll get to grips with end-to-end IoT app development to control an LED over the internet, before learning how to build RESTful APIs, WebSocket APIs, and MQTT services in Python. The second part delves into the fundamentals behind electronics and GPIO interfacing. As you progress to the last part, you'll focus on the "Things" aspect of IoT, where you will learn how to connect and control a range of electronic sensors and actuators using Python. You'll also explore a variety of topics, such as motor control, ultrasonic sensors, and temperature measurement. Finally, you'll get up to speed with advanced IoT programming techniques in Python, integrate with IoT visualization and automation platforms, and build a comprehensive IoT project. By the end of this book, you'll be well-versed with IoT development and have the knowledge you need to build sophisticated IoT systems using Python. What you will learnUnderstand electronic interfacing with Raspberry Pi from scratchGain knowledge of building sensor and actuator electronic circuitsStructure your code in Python using Async IO, pub/sub models, and moreAutomate real-world IoT projects using sensor and actuator integrationIntegrate electronics with ThingSpeak and IFTTT to enable automationBuild and use RESTful APIs, WebSockets, and MQTT with sensors and actuatorsSet up a Raspberry Pi and Python development environment for IoT projectsWho this book is for This IoT Python book is for application developers, IoT professionals, or anyone interested in building IoT applications using the Python programming language. It will also be particularly helpful for mid to senior-level software engineers who are experienced in desktop, web, and mobile development, but have little to no experience of electronics, physical computing, and IoT.

Authors: Wessel Badenhorst
Categories: Computers
Become a better, more productive programmer through a series of projects that will help you deeply understand and master each of the design patterns covered. In

Authors: Susan E. McGregor
Categories: Computers
There are awesome discoveries to be made and valuable stories to be told in datasets--and this book will help you uncover them. Whether you already work with da

Authors: Christian Mayer
Categories: Computers
Python programmers will improve their computer science skills with these useful one-liners. Python One-Liners will teach you how to read and write "one-liners":