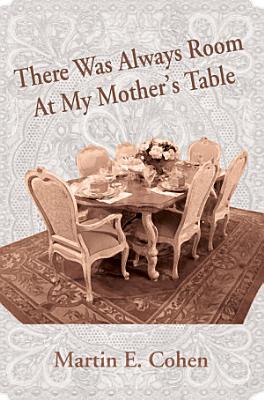 GET BOOK
There Was Always Room at My Mother's Table Book Description:

This is a story of how a small group of people made a transformation from Jew to Jewish American to American Jews. It is not unlike the transformation and Americanization of other peoples. How it differs is from the very fact that a religion, a set of beliefs transformed into a nationality. It is about a period of time in one woman's life, my mother who was a blend of Europe and America. She was a mixture of ethnicity, culture, religion and Americanized traditions; a potpourri of ideas and actions unlike most and yet common to us all. This is also my story as well as hers. It is about our lives and times of changes. It is about the games we played, the education we received, the changes in religious practices, the friends we had, and the environments in which we lived. My mother possessed virtues that were stark realities of everyday life. It was that there was always room at her table and there never was a shortage of food. She was a powerful loving matriarch who touched the lives of a great many people with a "touch" of this (knowledge), and a "touch" of that, (love).