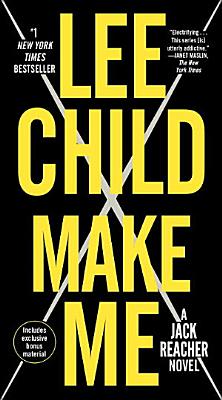 #1 NEW YORK TIMES BESTSELLER • NAMED ONE OF THE BEST BOOKS OF THE YEAR BY LOS ANGELES TIMES, THE GUARDIAN, AND SUSPENSE MAGAZINE • Stephen King calls Jack Reacher “the coolest continuing series character”—and now he’s back in this masterly new thriller from Lee Child. “Why is this town called Mother’s Rest?” That’s all Reacher wants to know. But no one will tell him. It’s a tiny place hidden in a thousand square miles of wheat fields, with a railroad stop, and sullen and watchful people, and a worried woman named Michelle Chang, who mistakes him for someone else: her missing partner in a private investigation she thinks must have started small and then turned lethal. Reacher has no particular place to go, and all the time in the world to get there, and there’s something about Chang . . . so he teams up with her and starts to ask around. He thinks: How bad can this thing be? But before long he’s plunged into a desperate race through LA, Chicago, Phoenix, and San Francisco, and through the hidden parts of the internet, up against thugs and assassins every step of the way—right back to where he started, in Mother’s Rest, where he must confront the worst nightmare he could imagine. Walking away would have been easier. But as always, Reacher’s rule is: If you want me to stop, you’re going to have to make me. Praise for Make Me “Child’s Reacher series has hit Book No. 20 with a resounding peal of wisecracking glee. Everything about it, starting with Reacher’s nose for bad news, is as strong as ever. . . . The big guy’s definitely on the upswing. The guy who writes about him is too.”—Janet Maslin, The New York Times “Another winner . . . There’s a reason why Child is considered the best of the best in the thriller genre: He can take all these strange elements and clichés and make them compelling and original.”—Associated Press “A superb thriller.”—New York Daily News “Child’s complete command of the story makes this thriller work brilliantly.”—Publishers Weekly (starred review) “I’ve read all twenty of Lee Child’s novels. Maybe there’s something wrong with me. But I can’t wait for the twenty-first.”—Malcolm Gladwell, The New Yorker “[The Reacher series] is the current gold standard in the genre. . . . In Make Me Lee Child delivers another Jack Reacher specialty; the total knockout.”—Dayton Daily News “Child serves up wingding plots, pithy dialogue, extraordinary background on intriguing topics, and cunningly constructed suspense. But what keeps us coming back—by the millions—is the chance to walk around in the skin of that big guy in the middle of everything.”—The Oregonian “A dark thriller . . . Lee Child’s Make Me, the twentieth in his wildly popular Jack Reacher series, delivers exactly what readers have come to expect from the perennial bestselling author: interesting characters, tight plots and page-turning action. . . . Readers won’t be disappointed.”—Minneapolis Star Tribune “Jack Reacher is back. . . . Readers new to this series will find this book a good starting point, and fans will be pleased to see Jack again.”—LibraryReads (Top Ten Pick) “The reigning champ ups the ante.”—Booklist (starred review)

Authors: Patrick Meanor
Categories: Biography & Autobiography
Focuses on how the declining market for short-story writers after World War II saw the migration of these writers to universities where they not only continued

Authors: Christina Lamb
Categories: Foreign news
An extraordinary collection of reportage that tells the story of some of the most important world events of the past 16 years, from one of the most talented and

Danger Is My Business