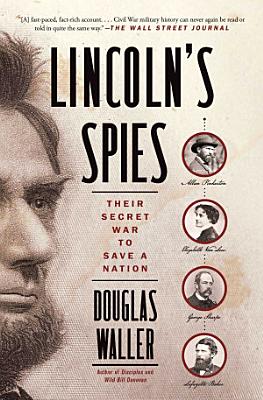 This major addition to the history of the Civil War is a “fast-paced, fact-rich account” (The Wall Street Journal) offering a detailed look at President Abraham Lincoln’s use of clandestine services and the secret battles waged by Union spies and agents to save the nation—filled with espionage, sabotage, and intrigue. Veteran CIA correspondent Douglas Waller delivers a riveting account of the heroes and misfits who carried out a shadow war of espionage and covert operations behind the Confederate battlefields. Lincoln’s Spies follows four agents from the North—three men and one woman—who informed Lincoln’s generals on the enemy positions for crucial battles and busted up clandestine Rebel networks. Famed detective Allan Pinkerton mounted a successful covert operation to slip Lincoln through Baltimore before his inauguration after he learns of an assassination attempt from his agents working undercover as Confederate soldiers. But he proved less than competent as General George McClellan’s spymaster, delivering faulty intelligence reports that overestimated Confederate strength. George Sharpe, an erudite New York lawyer, succeeded Pinkerton as spymaster for the Union’s Army of the Potomac. Sharpe deployed secret agents throughout the South, planted misinformation with Robert E. Lee’s army, and outpaced anything the enemy could field. Elizabeth Van Lew, a Virginia heiress who hated slavery and disapproved of secession, was one of Sharpe’s most successful agents. She ran a Union spy ring in Richmond out of her mansion with dozens of agents feeding her military and political secrets that she funneled to General Ulysses S. Grant as his army closed in on the Confederate capital. Van Lew became one of the unsung heroes of history. Lafayette Baker was a handsome Union officer with a controversial past, whose agents clashed with Pinkerton’s operatives. He assembled a retinue of disreputable spies, thieves, and prostitutes to root out traitors in Washington, DC. But he failed at his most important mission: uncovering the threat to Lincoln from John Wilkes Booth and his gang. Behind these operatives was Abraham Lincoln, one of our greatest presidents, who was an avid consumer of intelligence and a ruthless aficionado of clandestine warfare, willing to take whatever chances necessary to win the war. Lincoln’s Spies is a “meticulous chronicle of all facets of Lincoln’s war effort” (Kirkus Reviews) and an excellent choice for those wanting “a cracking good tale” (Publishers Weekly) of espionage in the Civil War.

Authors: Douglas Waller
Categories: History
This major addition to the history of the Civil War is a “fast-paced, fact-rich account” (The Wall Street Journal) offering a detailed look at President Abr

Authors: Arthur Orrmont
Categories: United States
An account of the work of Lafayette Baker in the secret service during the Civil War, as he worked to get rid of sources of disloyalty and corruption in the Uni

The Spy of the Rebellion

Authors: Steven Wilson
Categories: Fiction
It is 1863, the year of Gettysburg and Vicksburg, when a nation savagely tears at its soul. At the center of the carnage stands the calm, enigmatic figure of Pr

Authors: Steven Wilson
Categories: Fiction
1861. As the Civil War rages on, one man is determined to prove himself on the front lines of battle. But destiny has far greater plans for him. . . On the batt

The Register and Catalogue for the University of Nebraska, Lincoln, Nebraska

Authors: Dan Abrams
Categories: Juvenile Nonfiction
At the end of the summer of 1859, twenty-two-year-old Peachy Quinn Harrison was accused of murder in Springfield, Illinois. The man hired to save his life was n

Authors: David Perry
Categories: History
An in-depth illustration of shifting Civil War alliances and strategies and of Great Britain’s behind-the-scenes role in America’s War Between the States. I