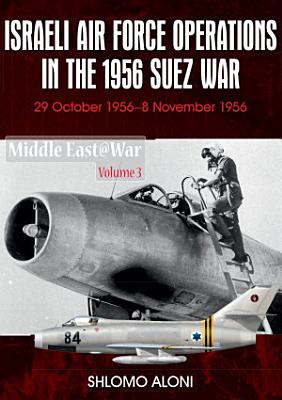 By participating in 1956 Suez Crisis Israel exploited an opportunity to join forces with France and the United Kingdom in an attack against Egypt in order to accomplish diplomatic, military and political objectives: to open the Red Sea international shipping lane to ships sailing from and to Eilat; to strengthen its alliance with France; to end – or at least to scale down – Egyptian hosted Palestinian terror attacks against Israel; to launch a preventive war in order to crush Egyptian military power before its completion of the transition to Soviet weapons could tempt Egypt to attack Israel and in order to accomplish a profound victory to deter Egypt from pursuing a another round of war policy. Operation KADESH was the Israeli part in the Anglo-French attack and this title chronicles Israeli Air Force operations along the timeline of Operation KADESH – from day 1 on 29 October 1956 until day 11 on 8 November 1956 – in thus far unmatched depth and detail; all known Israel Air Force missions and sorties are listed and described and all air combats between Israeli Mysteres and Egyptian MiGs and Vampires are presented and analyzed. The large variety of aircraft flown – Dassault Mysteres, Dassault Ouragans and Gloster Meteors; B-17 Flying Fortresses, P-51 Mustangs and De Havilland Mosquitoes; T-6 Texans (Harvards) and T-17 Kaydets (Stearmans); Nord 2501 Noratlases, C-47 Skytrains (Dakotas), Pipers and Consuls and even a pair of Sikorsky S-55 helicopters – are all covered in this title, which presents Israeli Air Force operations during the Suez War in a depth and detail unseen in previous publications. The text is supported by numerous photographs and color profiles. Middle [email protected] - following on from our highly successful [email protected] series, Middle [email protected] replicates the same format - concise, incisive text, rare images and high quality color artwork providing fresh accounts of both well-known and more esoteric aspects of conflict in this part of the world since 1945.

Authors: Shlomo Aloni
Categories: History
By participating in 1956 Suez Crisis Israel exploited an opportunity to join forces with France and the United Kingdom in an attack against Egypt in order to ac

Authors: David Nicolle
Categories:
Sixty years since the tripartite aggression of France, Great Britain and Israel against Egypt, this is the first account about Egyptian military operations duri

Key To The Sinai: The Battles For Abu Agelia In The 1956 And 1967 Arab Israeli Wars [Illustrated Edition]

Authors: George W. Gawrych
Categories: History
[Includes 5 figures and 21 maps] Situated between the Suez Canal and Israel and marked by the harsh environment of the central Sinai lies Abu Ageila, an unprepo

The Role of Airpower in the Iran-Iraq War

Authors: U. S. Military
Categories:
This unique book an outgrowth of questions raised about the conduct of air operations in the war between Iran and Iraq. Unlike previous Middle Eastern wars, thi

Authors: Michael Napier
Categories: History
From acclaimed aviation historian Michael Napier, this is a highly illustrated survey of the aerial fighting in the flashpoints of the Cold War. The Cold War ye

Authors: A. J. Barker
Categories: Egypt
British Colonel's first-hand analysis of the military operations and make-shift strategy employed in the Anglo-French and Israeli expedition against Egypt in 19

Authors: Shlomo Aloni
Categories: History
From the B-17 Flying Fortress and PBY Catalina, via the F-4 Phantom to the F-15I Thunder, Israeli Air Force 69 Squadron, the Hammers, have always been the long-

Authors: John Adreas Olsen
Categories: History
Airpower in Action tells the story of the evolution of airpower and its impact upon the history of warfare. Through a critical examination of twenty-nine case s

Key to the Sinai

Authors: George Walter Gawrych
Categories: Abu Ageila, Battle of, Abu 'Ujaylah, Egypt, 1956
In both the 1956 and 1967 wars, Abu Ageila was the main gateway to the Sinai for the Israel Defense Forces. Yet there were marked differences between Egyptian a