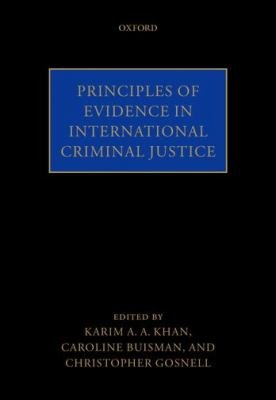 Principles of Evidence in International Criminal Justice provides an overview of the procedure and practice concerning the admission and evaluation of evidence before the international criminal tribunals. The book is both descriptive and critical and its emphasis is on day-to-day practice, drawing on the experience of the Yugoslavia, Rwanda and Sierra Leone Tribunals. This book is an attempt to define and explain the core principles and rules that have developed at those ad hoc Tribunals; the rationale and origin of those rules; and to assess the suitability of those rules in the particular context of the International Criminal Court which is still at its early stages. The ICC differs in structure from the ad hoc Tribunals and approaches the legal issues it has to resolve differently from its predecessors. The ICC is however confronted with many of the same questions. The book examines the differences between the ad hoc Tribunals and the ICC and seeks to offer insights as to how and in which circumstances the principles established over years of practice at the ICTY, ICTR and SCSL may serve as guidance to the ICC practitioners of today and the future. The contributors represent a cross-section of the practicing international criminal bar, drawn from the ranks of the Bench, the Prosecution and the Defence and bringing with them different legal domestic cultures. Their mixed background underlines the recurring theme in this book which is the manner in which a legal culture has gradually taken shape in the international Tribunals, drawing on the various traditions and experiences of its participants.

Authors: Karim A. A. Khan
Categories: Evidence (Law)
Principles of Evidence in International Criminal Justice provides an overview of the procedure and practice concerning the admission and evaluation of evidence

Authors: Petra Viebig
Categories: Law
This work deals with the exclusion of illicitly obtained evidence at the International Criminal Court. At the level of domestic law, the so-called exclusionary

Authors: Artur Appazov
Categories: Law
The book is a comprehensive narration of the use of expertise in international criminal trials offering reflection on standards concerning the quality and prese

The Internationalisation of Criminal Evidence

Authors: John D. Jackson
Categories: Law
Although there are many texts on the law of evidence, surprisingly few are devoted specifically to the comparative and international aspects of the subject. The

Authors: Christoph Safferling
Categories: Law
This book sets out and analyses the procedural law applied by international criminal tribunals and the International Criminal Court (ICC). It traces the develop