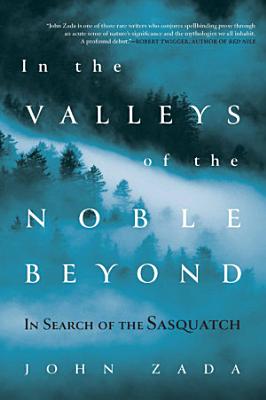 GET BOOK
In the Valleys of the Noble Beyond Book Description:

A journalist travels through British Columbia exploring of one of the world’s most baffling mysteries—the existence of the Sasquatch. On the central and north coast of British Columbia, the Great Bear Rainforest is the largest intact temperate rainforest in the world, containing more organic matter than any other terrestrial ecosystem on the planet. The area plays host to a wide range of species, from thousand-year-old western cedars to humpback whales to iconic white Spirit bears. According to local residents, another giant is said to live in these woods. For centuries people have reported encounters with the Sasquatch—a species of hairy bipedal man-apes said to inhabit the deepest recesses of this pristine wilderness. Driven by his own childhood obsession with the creatures, John Zada decides to seek out the diverse inhabitants of this rugged and far-flung coast, where nearly everyone has a story to tell, from a scientist who dedicated his life to researching the Sasquatch, to members of the area’s First Nations, to a former grizzly bear hunter-turned-nature tour guide. With each tale, Zada discovers that his search for the Sasquatch is a quest for something infinitely more complex, cutting across questions of human perception, scientific inquiry, indigenous traditions, the environment, and the power and desire of the human imagination to believe in—or reject—something largely unseen. Teeming with gorgeous nature writing and a driving narrative that takes us through the forests and into the valleys of a remote and seldom visited region, In the Valleys of the Noble Beyond sheds light on what our decades-long pursuit of the Sasquatch can tell us about ourselves and invites us to welcome wonder for the unknown back into our lives. Praise for In the Valleys of the Noble Beyond “Books on supernatural phenomena typically steer one of two courses: tabloid gullibility or mean-spirited debunkery. Zada deftly tightropes between the two. . . . In the Valleys of the Noble Beyond is not really about sasquatch. It is about how we see what we want to see and don’t see what we’re not prepared to see. . . . A quirky and oddly captivating tale.” —Eric Weiner, Washington Post “An adventure story in the tradition of Paul Theroux and, in parts, Jon Krakauer. . . . Zada is a latter-day Henry David Thoreau or John Muir. . . . Searching for an elusive ape, Zada has a knack for meeting unforgettable humans.” —Peter Kuitenbrouwer, Globe and Mail “If people can believe in God, why not Sasquatch? Zada takes us through the temperate rainforest of British Columbia looking for both the hairy bipedal and the mythology and landscape surrounding it. Terrific nature writing with a furry twist.” —Kerri Arsenault, Orion

In the Valleys of the Noble Beyond

Authors: John Zada
Categories: Social Science
A journalist travels through British Columbia exploring of one of the world’s most baffling mysteries—the existence of the Sasquatch. On the central and nor

In the Valleys of the Noble Beyond

Authors: John Zada
Categories: Social Science
A rare and insightful account by a newsroom insider of how the news skews our perceptions and disorients society 'Fake news' has become a ubiquitous catchphrase

Religion, Culture, and the Monstrous

Authors: Joseph P Laycock
Categories:
Religion, Culture, and the Monstrous explores the intersection of monster theory and religious studies. Within these chapters lurk a gamut of strange and demoni

Authors: Robert Twigger
Categories: History
Robert Twigger, poet and travel author, was in search of a new way up England when he stumbled across the Great North Line. From Christchurch on the South Coast

The Geology of Pennsylvania

A Handbook of Rome and Its Environs

How Green Was My Valley

Authors: Richard Llewellyn
Categories: Fiction
Growing up in a mining community in rural South Wales, Huw Morgan is taught many harsh lessons. Looking back, where difficult days are faced with courage and th