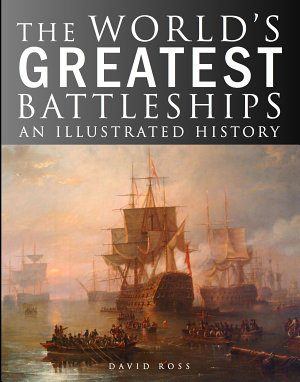 For more than 400 years, the big-gun warship stood as the supreme naval war machine. It was not only a major instrument of warfare, but a visible emblem of a nation’s power, wealth and pride. So powerful was the link between the battleship and national feeling that even into the nuclear era, some, like France’s Richelieu, were held in naval reserve. The World’s Greatest Battleships features 52 of the greatest warships to have sailed and fought in the last 500 years. Beginning with English king Henry VIII’s flagship, Henry Grace à Dieu, the book covers all the main periods of battleship development, including the great sail ships, such as Sovereign of the Seas, Santissima Trinidad and HMS Victory. The advent of steam-driven warships provide the core of the book, beginning with the introduction of Gloire in 1859, and continuing through all the major pre-Dreadnoughts, such as Inflexible, Mikasa, Maine and Tsessarevitch. The author continues with detailed coverage of the great battleships of the two world wars, including Derfflinger, Nagato, Hood, Scharnhorst, Vittorio Veneto, Yamato and Iowa. The book closes with the last new battleship to be commissioned, Vanguard, in 1946. Included are some of the world’s greatest and most powerful capital ships. Many had eventful careers and participated in famous actions – such as the Prince of Wales’ and Hood’s pursuit of the German raider Bismarck; others, such as the Tirpitz, are remembered as a lurking threat; yet others, such as the USS Maine, are only remembered for being sunk in mysterious circumstances. Each entry includes a brief description of the battleship’s development and history, a profile view, key features and specifications. Packed with more than 200 artworks and photographs, The World’s Greatest Battleships is a colourful guide for the military historian and naval warfare enthusiast.