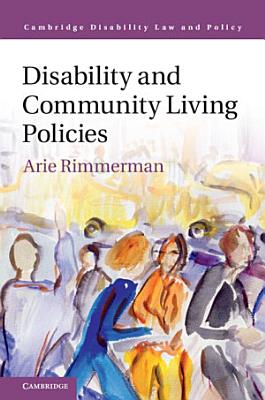 This book provides a comprehensive analysis of the roots of institutionalization, deinstitutionalization legislation and policies of the twentieth century, and twenty-first-century efforts to promote community living policies domestically and internationally, particularly through the role of the United Nations Convention on the Rights of Persons with Disabilities (UNCRPD), a landmark treaty adopted on 13 December 2006. Rimmerman shows that deinstitutionalization and community living cannot be examined only in terms of the number of institutions closed but also through the substantial change in values, legislation, and policies supporting personalization, as well as the social participation of people with disabilities. The book includes a significant exploration of United States legislation and important Supreme Court decisions compared with European policies toward community living. Finally it discusses the importance of Articles 12 and 19 of the convention and demonstrates the case of Israel that has used the convention as a road map for proposing a new community living policy.

The Convention on the Rights of Persons with Disabilities

Authors: Ilias Bantekas
Categories: Law
This treatise is a detailed article-by-article examination of the United Nations Convention on the Rights of Persons with Disabilities (CRPD). Each article of t

Authors: Roger J. Stancliffe
Categories: Psychology
This book examines choice and preference in the lives of people with disability, focusing on people with intellectual and developmental disabilities. It provide

Authors: National Academies of Sciences, Engineering, and Medicine
Categories: Medical
Living independently and participating in one's community are priorities for many people. In many regions across the United States, there are programs that supp

Departments of Labor, Health and Human Services, Education, and Related Agencies Appropriations for 2016